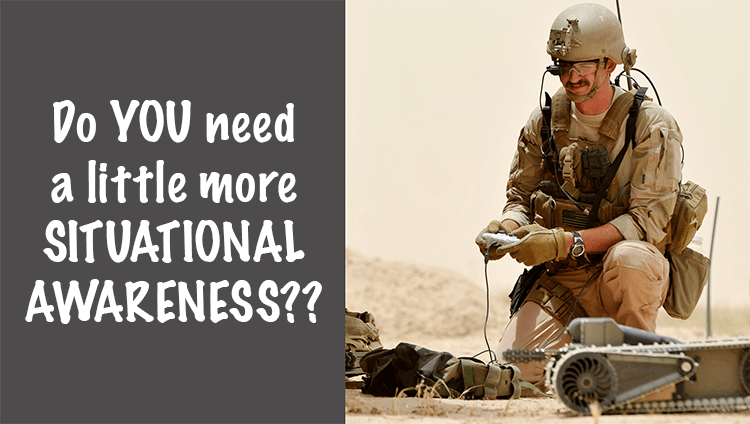 “I can tell you the license plate numbers of all six cars outside. I can tell you that our waitress is left-handed, and the guy sitting up at the counter weighs 215 pounds and knows how to handle himself. I know the best place to look for a gun is the cab of the gray truck outside….”
–Jason Bourne, The Bourne Identity

Wouldn’t it be awesome to be hyperaware? To know exactly what was going on around you at all times? To always be prepared for what was coming…because you saw it coming?

Having Jason-Bourne-like abilities really is a preparedness junkie’s wet dream.

But of course, that’s not gonna happen.

If nothing else, our brains simply don’t have the stamina to be hyper-vigilant 24/7. Yeah, we can sustain focus for short, intense periods of time, but before too long, we fizzle out. We get sloppy. And eventually, we need a real break.

In last week’s newsletter that I sent to my subscribers, I held forth on the topic of situational awareness. I talked about how a lack of knowledge about my personal property had ultimately caused me quite a bit of grief and an unexpected phone call from the sheriff’s office (!!), and I concluded with a declaration to practice more “SA” in my daily life.

But just how does one go about doing that?

How does one bring out their inner Jason/Jane Bourne without going cuckoo??

Well, it turns out that everyday SA is not really that hard. It’s not like you have to develop a whole new set of skills and buy a bunch of surveillance equipment. Rather, you simply need to shift your mindset. You have to make it your daily practice to check out the scene and quit coasting through your environment unaware. In short, you need to PAY ATTENTION.

Here are a few easy ways implement what I’m talking about in your everyday life.

Take the damn earbuds out of your ears!

How are you going to hear a car come up behind you while you’re on a walk if you’re blasting Adele through your skull to the exclusion of all other input? Or worse, what if a Bad Dude comes up behind you? Do you really want the first warning that someone is following you to be their hands over your mouth? No. No you don’t.

And while we’re at it, don’t text and walk. Seriously. Stop it.

Okay, so she’s reading the financial section, but still….

Pay attention to the local happenings.

Listen to your local news radio a few times a day. Scan the headlines of the newspaper while you wait for your coffee. Glance at the billboards on the highway. In short, keep abreast of what’s going on in your area, both politically and socially.

Look before you lock…and unlock.

Before you enter your car in a parking lot, do a quick visual scan to see if someone is lurking. Do the same before you exit your car. Abductions and attacks frequently take place in parking areas, so be on your guard..

Despite what you may think as a frequent flier, this is NOT home sweet home.

When you board an airplane, find your two closest exits. Count the rows of seats between you and those exit points. If you have to get out of the plane in a hurry and can’t see due to smoke or darkness, you’ll be happy to have those row numbers committed to memory.
Also, don’t tune out the safety briefing. Yeah, you’ve heard it a zillion times before. Listen to it for the zillionth-and-one time, my friend. And while you’re at it, do a quick scan of that laminated card in your seatback pocket. I know you could draw it from memory by now. Do it, anyway. It’s 60 seconds well spent.

This is one bad guy you don’t want sneaking up on you.

Keep an eye on the weather. Is it going to be unseasonably hot? Is there potential for a blizzard? Is a hurricane en route? Don’t let Mother Nature catch you by surprise when you can help it.

Always have an exit strategy.

I’m sure all of these people have an exit strategy in place.

When you sit down in a restaurant, movie theater, or other public place, figure out three likely ways you’d get out of the area quickly if necessary (doors are obvious; also consider the extreme such as dashing out via the kitchen or through a window in the bathroom).

BONUS: glance around for a few “weapons of opportunity.” These are everyday objects that could be pressed into service should the need arise.

As you can see, what we’re shooting for here is a general state of relaxed-but-aware. Ferret out what’s important, and let the rest of the info drift out of your mind. If something tweaks your Spidey Sense, then kick it up a notch and pay closer attention. When something looks like it’s gonna go Tango Uniform, take steps to avoid a negative outcome if possible…and then go on with your day.

It really is that simple. But we’re all so busy and self-absorbed that we are losing that most basic of animal instincts: being aware of our surroundings.

So change your default mode and start PAYING ATTENTION. At its most basic, SA will simply make you more cognizant of your local scene. And at its more extreme…it could actually save your life.

Want to learn even more about keeping yourself safe?
Download my free “Emergency Preparedness for Women” guide HERE!