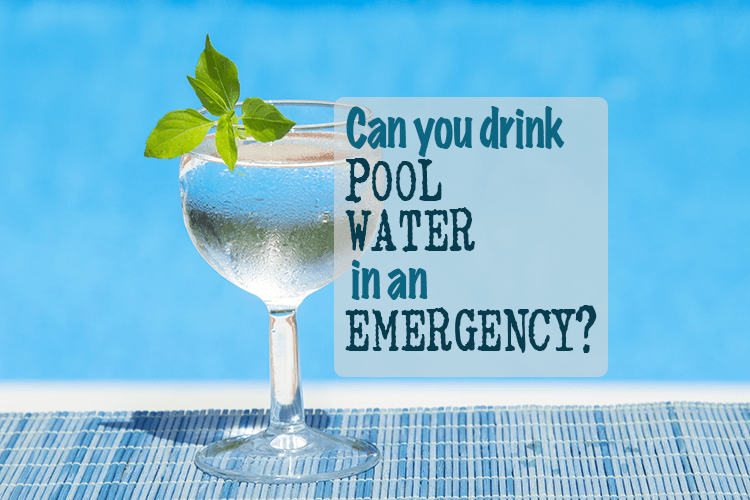 Water, water everywhere…but is it safe to drink??

If there were ever a major catastrophe that caused a long-term disruption in the water supply, your plan is to use your swimming pool’s (or your neighbor’s pool) water to get through the crisis, right?

I know that had been MY assumption when I first started thinking about emergency preparedness!

After all, averaged across the United States, there is one swimming pool for every 10 homes (go ahead: check it out on Google Earth. You will be ah-may-zed at how many swimming pools are in your ‘hood!). Given the average capacity of both above- and below-ground pools, this works out to around 2000 gallons of water for every single household in this country, effectively “reservoired” in people’s backyards!!

But is it really that simple? Can you really just scoop buckets of water out of your pool and go on about your post-disaster day?

The short answer is NO…but the long answer is a (qualified) yes!

Make yourself comfortable, because I’m going to start by outlining the main reasons drinking “raw” pool water is a VERY BAD IDEA, and then I’m going to conclude with HOW TO GET AROUND THIS VERY BAD IDEA at the end of the blog.

Your pool is full of poison.

And I’m not just talking about chlorine or bromine. Those bad boys evaporate pretty quickly on their own, or you can just boil them off. And it’s precisely because of their flighty character that we have a problem. You see, in order to prevent these antibacterial agents from leaving the pool practically as fast as the pool guy can dump them in, they are always complexed with other chemicals called “stabilizers.” And guess what? Those stabilizing chemicals are some nasty shit.

Take, for example, cyanuric acid. This common stabilizer is derived from <insert trumpet noise here> cyanide. You know: the stuff that kills spies. And, potentially, you.

So if you let a glass of pool water sit around for a few days (or you boil it), you’ll evaporate off the chlorine or bromine. But the stabilizer (i.e., poisonous shit) will still be there, just chillin’. No bueno.

Not all bacteria are susceptible to chlorine/bromine.

Could be a flagellate; could be an alien spacecraft. Best not to take chances, either way.

Sad, but true: there are single-celled organisms that are immune to our antibacterial weaponry. I’m talking Cryptosporidium (which periodically makes a surprise appearance in municipal water supplies), Giardia (that lovely baddie which makes hikers violently ill when they drink out of a not-so-pristine mountain stream), etc. If water is in short supply, the last thing you want to be dealing with is the dehydrating effects of projectile vomiting and explosive diarrhea!

But what if you need to drink that water anyway??

Okay, so now you know drinking pool water straight out of the deep end is a bad idea.

But let’s say you find yourself in an extended emergency situation and you’ve either consumed all your stored potable water…or never stored drinking water in the first place! Well, then, using your pool water as a personal reservoir may be your only option.

I’ve read a ton of stuff online about the possibility of building a solar still to remove all the chemicals from your pool water (via a bucket or barrel that you’ve set up on the side, obviously), but even in the driest environments, this just doesn’t seem practical.

At the scale one could reasonably construct a solar still within the confines of an urban backyard, the numbers I’ve found indicate that on a daily basis, you would fall far short of the quantity of potable water you would need for a single person, let alone an entire family.

So what’s the solution? Build a Reverse Osmosis Kit!

This set-up (for a grand total of about $200) should remove approximately 95{5b94df0808d5051ae4460ba229ec68b809d99f898aebd4fa5019c7ba642362c2} of all minerals and contaminates in the pool water, making it—in my opinion (and remember, I am neither a doctor nor a public health official)—reasonably safe for human consumption IF there is no other alternative.

One other point: if your power goes out, your pool pump goes out, too. Which means that within a few days, your pool is going to turn a lovely emerald green.

This we do not want. At least, not any sooner than is avoidable.

So if you don’t already keep your pool covered, be sure to have a dark tarp on hand that you can toss across the pool the second you realize that you’re going to be without power for the foreseeable future. The tarp/cover won’t make your pool immune to an eventual algal bloom, but it’ll delay it. It’ll also help cut down on evaporation of a precious resource.

And once that algae does appear, which it inevitably will? Just treat it with a camp filter (e.g., a Platypus Gravity Works) to take out the big chunks before running the water through your trusty RO set-up.

It’s not that your RO system can’t handle algal water directly; it’s just that pre-filtering your slimly pool muck will extend the life of your RO cartridges that much longer.

So in summary: using pool water for anything other than flushing toilets and washing clothes/bodies should only be considered as a last resort. After all, even with the RO system I’ve described above, you’re still looking at residual contaminates from the pool water stabilizers. Those toxins accumulate. Remember that.

But if your pool water is all that stands between you and certain death from dehydration, well, you’ll be happy you have put together an RO Pool Survival Kit beforehand!

And now it’s your turn! What are your emergency hydration plans? Rain barrels? CostCo flats of bottled water? A secret artesian spring? Post your thoughts in the comments below!

If you’re not already on my newsletter list, what the heck are you waiting for?! I deliver all sorts of tasty little morsels straight to my subscribers’ inboxes every week. Sign up HERE …and get a free Emergency Guide JUST FOR THE LADIES, to boot!